There seems to be a serious problem in the update process of the vShield Manager appliance. I had to update a vSphere 5.0 / vCloud Director 1.5 environment running vSM 5.0.1-638924 to the latest releases (vSphere 5.1 update 1a / vCD 5.1.2 / vSM 5.1.2a). Disk space on the vSM was sufficient, the update itself using the VMware-vShield-Manager-upgrade-bundle-5.1.2-943471.tar.gz went fine, the appliance rebooted and was busy with the upgrade process for some time, as expected. Afterwards the UI showed the new release, the VM was idling, update apparently successful.
But after a manual reboot (due to a scheduled maintenance of the whole environment) before migrating the configuration to a new vSM instance the appliance would not come up anymore. The disk driver encountered fatal I/O errors, maybe due to file system or partitioning damage (although the symptoms do not clearly indicate that), finally resulting in a kernel panic: 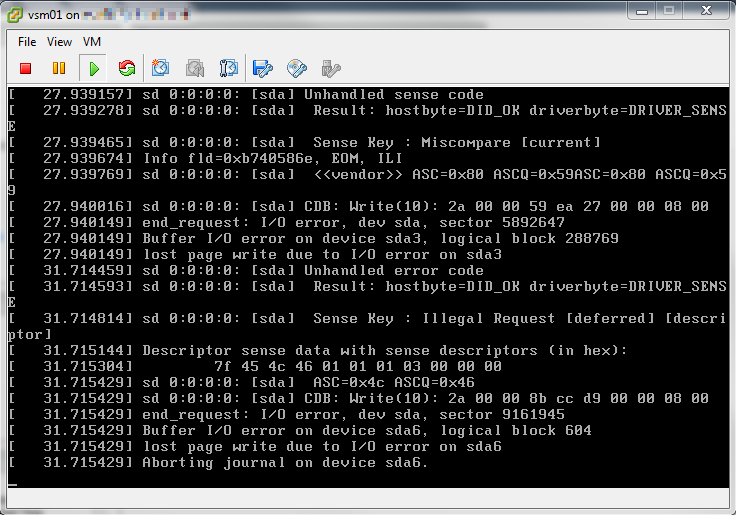 The update failure was reproducible after a rollback and even a restore from backup, on iSCSI storage and ESXi local disk. I’m still investigating the issue. Meanwhile I suggest to exactly follow the steps described in the vShield Installation and Upgrade Guide, with the additional advice not to reboot the appliance after the update. VMware requires to deploy a new vShield Manager into the vSphere environment anyway when updating from 5.0 to 5.1.2 due to the virtual hardware upgrade. The updated vSM seems to run fine at first, so immediately perform the configuration backup as described and restore it to the new vSM.